Tried visiting The Cinnamon Route at Kuravankonam, Trivandrum finally… Been wanting to try ever since I saw their ads regarding their thali options and more recently their biriyani options as well… I ended up reaching at around 12:30pm and pretty much found myself to be the only customer in the place (as can be seen from the empty dining room pics) that I wondered if the place is closed 🙂 But very soon got greeted by a waitress and so, I guess it turned out to be a fluke day 🙂 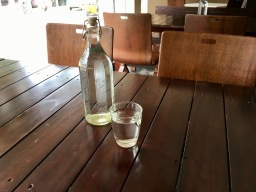 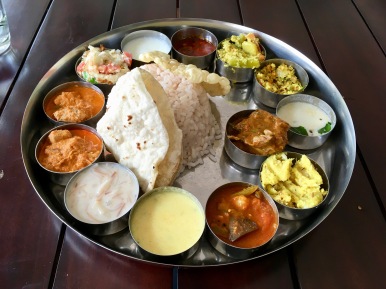 I was handed the lunch time meals menu and it had options of their Thalis and Biriyanis… I had gone there expecting to try their biriyani but I changed my mind and decided to go for their Bade Miya Thali… Now the Bade Miya Thali as per their menu and ad consists of Boiled Rice, a Phulka, 4 Non-Veg sides, 6 Veg sides, Pickle, Chammanthi and Payasam and  the Non-Veg sides are mentioned to be a side each of Egg, Chicken, Fish and Meat and when I enquired, I found that by Meat, they mean Beef… Since I don’t eat Beef, I asked if they could replace the Beef with any of the others… They happily obliged and so, got one extra portion of the Fish Curry as you can see from the pic 🙂

What came in the Thali other than the two portions of Fish Curry, Rice and Phulka were an Omlette, a portion of Chicken Curry, Curd, Pappadom, Ginger-Lime Pickle, Aviyal, Cabbage & Carrot Thoran, Pachadi, Kappa (Tapioca/Cassava), Sambhar, Pulissery and Semolina Payasam… 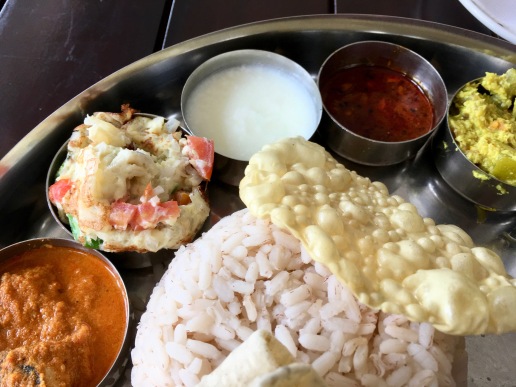 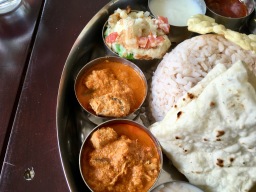 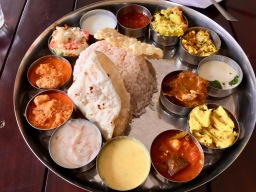 Now coming to the taste, the only problem I had with the whole Thali was that it was too spicy for me, especially the Fish and Chicken sides… However, flavour-wise, I found everything to be spot on… The fish was a proper Naadan Fish curry made with Coconut and Coccum… The fish turned out to be Tuna-Mackerel which was perfectly cooked… The Chicken curry was a version of the Pepper Chicken Masala and the portion consisted on a single piece with a medium thick gravy that was loaded with crushed black pepper in it… The Phulka I think was made with Maida and the Omlette had chopped Onions, Green Chillies and Tomato in it… The Omlette was cooked perfectly without the Egg going dry like how it does in most places here in Trivandrum…

As for the Vegetarian sides, I felt that the Sambhar and Aviyal were as good as can be expected, with nicely seasoned flavours and almost crispy Vegetables… The pachadi was the standard one with cucumber in it… The Thoran was made with Cabbage and Carrot, which is my favourite combination to have in the Thoran (maybe add in some Beetroot as well 🙂 ) and the Kappa was made to be the dry kind… The Pulissery on the other hand was something I loved from the Thali cause of two reasons, the first being that it had the flavour of Mango in it and the second being that it helped me neutralise some of the spiciness of the rest of the dishes when mixed with the rice… The pickle turned out to be awesome though, made up of Lime with a lot of ginger… Its not the pickle pickle that we are used to in a meal, but rather the diluted kind, the one we called Naranga Curry up in the North 🙂 Finally, the Payasam was quite rich and creamy and consisted of Semolina and roasted Cashews and dried Grapes…

Anyways, definitely a good Thali to have that tasted quite authentic with the flavour of Curry Leaves and Coconut throughout and everything tasted incredibly fresh as well…  I only wish that it were less spicier that how I got it… But thats just me… 🙂