Disney’s money-spinning mission to recycle its animated back catalogue with “live action” remakes continues apace. In the past few years we’ve had Tim Burton’s Alice in Wonderland and Dumbo, Kenneth Branagh’s Cinderella, Bill Condon’s Beauty and the Beast and Guy Ritchie’s Aladdin. Coming up are Niki Caro’s Mulan, Rob Marshall’s The Little Mermaid, and many, many more. Although consistently profitable, the reason for these reboots’ existence remains questionable. Did Emma Watson make a better Belle than the drawn star of Disney’s 1991 animation just because she’s “real”? With this new (and peculiarly faithful) version of The Lion King however, the question is not whether a “live action” remake can improve on an animated classic. Rather, it’s what we should call an animated movie that eerily mimics reality while featuring no “live action” whatsoever.

The opening of Disney’s live-action remake of The Lion King had me scratching my head. “Are those real animals?” The way the characters look and move — from the roaming giraffes to the grazing rhinos — all seems so lifelike. The first glimpse at Mufasa standing above his kingdom, mane blowing in the wind, forced me to squint to make sure he wasn’t an actual lion. Of course, the characters are computer-generated. But they seem so realistic it’s hard to tell the difference. Even the lush green backdrops, with their flowing streams, swaying trees and gushing waterfalls, look like scenes from a nature documentary.

But while CGI offers lifelike characters, it lacks in emotional impact. How do you show sadness or excitement in an animal that’s designed to look, for want of a better term, real? There are moments when characters’ voices convey pain, joy or fear, but that’s rarely reflected in the animals’ facial expressions. Still, there are times when Simba’s sadness or Scar’s wrath, for example, is effectively conveyed with their eyes.

Comedy also takes a hit in the remake directed by Jon Favreau. While the humor in the animated film felt timeless ,the jokes in this release feel forced. Some moments, like when the hyenas bicker about personal space, are clearly designed to elicit laughs, but at my showing at least, the audience seemed to be chuckling out of a sense of obligation.

The characters, for the most part, aren’t overshadowed by the film’s star- studded cast, which includes Donald Glover (Simba), Keegan-Michael Key (Kamari), Seth Rogen (Pumbaa) and Billy Eichner (Timon). We’re still able to see characters like Simba as separate from the actors who voice them, and it’s thankfully just as easy to become absorbed in the playful antics of Timon and Pumbaa (with the added touch of Rogen’s signature laugh, of course). James Earl Jones, who lends his voice to Mufasa once again, is as commanding and powerful as in the original film, maintaining our understanding and admiration for his character.

But by and large, this new Lion King hews pretty closely to the animated Lion King, at times even replicating the same shots and editing patterns as the original. And the effect can feel like a stunt — like someone decided to do a scene-by-scene re-creation using real-life animal footage. It doesn’t help that the characters in some cases have been rendered with such realism that they have lost all human expression on their faces. Maybe that’s the idea — to not anthropomorphize them too much and to stay grounded in zoological authenticity.

But they’re still talking, and singing, only now their faces are inexpressive; it’s a weird disconnect. That creates an unfortunate hierarchy among the actors, allowing some to shine while leaving others to drift. As Scar, the conniving, embittered uncle who kills Mufasa and claims the throne for himself, Chiwetel Ejiofor brings the kind of howling, snarling energy you’d expect from a true Shakespearean; he connects to the story’s raging passions. (Of course, this was also true of the original, which had the sensuous, slithery stylings of Jeremy Irons.) Whenever he’s “onscreen,” the film has genuine power.

As the grown-up Simba, Donald Glover stays too above the fray. He’s ordinarily a fine actor, but here we sense a distance between his character and his voice. It reminded me of how Disney’s actual nature docs, the Disneynature series, will often have the narrator half-perform dialogue for the creatures onscreen, just to keep things interesting. As Nala, Beyoncé suffers a similar fate. The talking lion might look realistic, but when we hear her dialogue, all we see is Beyoncé in a recording booth, reading lines. The comic-relief characters split the difference: Seth Rogen and Billy Eichner are delightful as the farting warthog Pumbaa and his wiseass meerkat pal Timon; John Oliver is plunge-a-skewer-in-your-ears irritating as Mufasa’s avian steward Zazu Favreau’s previous talking-animal-heavy Disney live-action remake, The Jungle Book, was a masterpiece — a stylized, communitarian fever dream that transformed the thickets and caves of its wild landscape into a grand stage for its operatic fable of betrayal and belonging. Whenever The Lion King sticks with that approach, it works beautifully. Pride Rock, the outcropping on which much of the movie’s drama turns (and where the animal kingdom’s fate is decided) looms heavily in the characters’ minds. 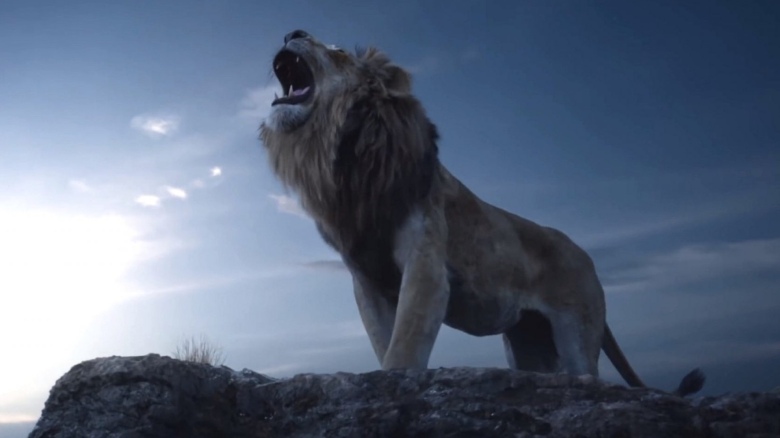 When Simba takes his final, lonely walk to accept his royal destiny — his supposed moment of triumph — we can sense his hesitation. Similarly, Scar’s nocturnal performance of “Be Prepared” (which, in the original, was a dementedly surreal vision of marching hyenas and roaring hellfire) makes for a mocking echo of that “Circle of Life” opening scene: Instead of making the entire savannah bow down before his heir in the morning light, Scar assembles his ghostly gathering of scavengers, as he leaps sneering and singing from rock to rock, raging, contemptuous, and prideful.